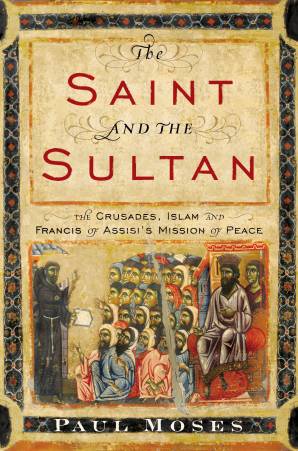 The Prayer of St. Francis, “Make me a channel of your peace”, I have sung often, but I never knew that St. Francis of Assisi took his peacemaking efforts right up to a political and international level until I read this book. Paul Moses, a New York journalist, editor and professor, did a thorough piece of research to find out as much as possible about an intriguing event of the 13th century.

During the Fifth Crusade in 1219 the Crusaders aimed at capturing the city of Damietta in the Nile Delta as a start to the capture of Egypt. Francis felt called to try to avert the impending violence by meeting personally with the Sultan of Egypt, Malik al-Kamid, a nephew of Saladdin. Accompanied only by another brother, he travelled on foot and unarmed from the Crusader encampment on one side of the Nile right to the Sultan’s camp across the river and 8 miles south. The men’s peaceful demeanour disarmed the guards and they were taken to the Sultan, whom he greeted with “May the Lord give you peace.” He denied being an emissary of the Crusade leaders, and claimed he had come as a messenger of the Lord God, and asked for a hearing.

The Sultan granted Francis his request and listened respectfully as Frances preached his message.

He treated the two brothers as honoured guests for several days, and even permitted them to preach to the Muslim soldiers. Clearly, these two friars, Christian “sufis”, did not speak disrespectfully of the Muslim religious beliefs or the Koran. But if their objective was to convert the Sultan to the Christian faith they did not achieve their aim. Nor did they bring an end to hostilities. The bloody war went on, and the author places the blame squarely on the political and commercial as well as the religious motivations of the European powers. Francis distanced himself from these aims and remained a faithful disciple of Jesus, who had taught him to love his enemies, not kill them.

In his youth Francis had pursued a military career. He was involved as a Cavalry soldier in a losing battle with a neighbouring city state, saw war at its worst, and was taken prisoner. That experience started a spiritual awakening which led him eventually to embrace a life of poverty and service to others. Besides learning how Francis became a “CO”, the reader will learn much about the sorry state of Christendom in the Middle Ages, the deplorable aggression of the Crusaders against the Muslims, who certainly responded in kind. For a monk to find a way past his vow of obedience to the Pope and into the household of the enemy and proclaim there the message of God’s love for all people, is an achievement that would-be peacemakers today can be inspired by.

Indeed, peacemakers have been inspired over the centuries. The author refers to several persons who, inspired by St. Francis, have had a positive influence on Christian/Muslim relations, leading up to the Second Vatican Council statement to that effect in 1965. And in 1986 Pope John Paul II called for a World Day of Prayer for Peace to be held in Assisi. At the event he said, “St. Francis is known and revered by so many throughout the world as a symbol of peace, reconciliation and brotherhood.” And we all sing, “Where there is hatred, let me bring your love.”

Mary Groh, the president of Conscience Canada, continues to be inspired by St. Francis.