The United Nations has just recently decided to postpone the UN Conference on Nuclear Disarmament scheduled to take place in New York from May 14-16, 2018. New dates for the UN conference have not yet been set.

As a result the Count the Nuclear Weapons Money, a 7-day action highlighting the colossal nuclear weapons budget and what this money could instead support, will be postponed until UN Disarmament Week , October 24-30, 2018.

This just in from the Basel Peace Office!

You are invited to participate in an exciting action: Count the Nuclear Weapons Money.

One trillion dollars is being allocated over the next ten years to modernize the nuclear arsenals of nine countries.The corporations making these weapons lobby for increased spending on nuclear weapons, stimulating the nuclear arms race and increasing the risk of a nuclear war.

Count the Nuclear Weapons Money will demonstrate the scale of this investment, and how it could instead be devoted to peace and humanitarian needs. While governments meet at the United Nations in New York for the first ever United Nations High-Level Conference on Nuclear Disarmament, we will be outside the UN counting one million specially designed notes each of $1 million value, adding up to $1 trillion.

Between May 10-16 we will count money ($100 million per minute, $6 billion per hour, $146 billion per day for seven days). While counting we will highlight economic, social and environmental areas in which this money could instead be invested. 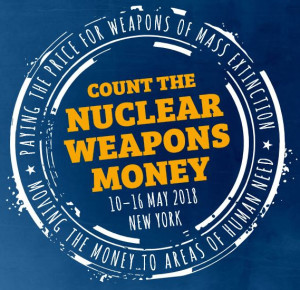 We have parliamentarians, civil society leaders, artists, sports stars, musicians, activists, religious leaders, youth, war veterans and others signed up to count the money for 20-30 minutes each. Click here to sign-up as a money counter.

This action is part of Move the Nuclear Weapons Money, a global campaign to cut nuclear weapons budgets, divest from nuclear weapons corporations and move the money to meet areas of human need, such as ending poverty, protecting the climate, supporting renewable energy, creating jobs, and providing adequate healthcare, housing and education for all.

The campaign was launched in October 2016 by the International Peace Bureau, World Future Council and Parliamentarians for Nuclear Non-proliferation and Disarmament. Conscious Canada supports this campaign along with many other organisations and networks working in cooperation with the Global Campaign on Military Spending. 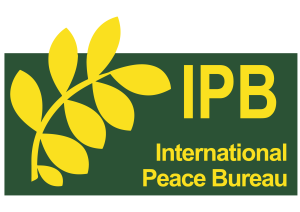 Conscience Canada has recently become a member of the International Peace Bureau.

The IPB is dedicated to a vision of the world without war. For more than 125 years the IPB has worked on a wide range of peace promotion topics, including nuclear weapons, the arms trade and other aspects of disarmament; peace education and creating a culture of peace; women and peacemaking; peace history; as well as related themes such as international law and human rights.

Conscience Canada shares IBP’s vision and its belief that by reducing funding for the military, significant amounts of money can be released for social projects, domestically or abroad, which can lead to the fulfillment of real human needs and the protection of the environment.

More information about the International Peace Bureau can be found on the IBP website. The IPB newsletters are there along with info on other publications, activities, and their Youth Network.

The Global Campaign on Military Spending (GCOMS) is an international campaign promoted by the International Peace Bureau. The Global Days of Action (GDAMS) it organizes is an annual occurrence. The aim is to reduce the global military spending thanks to cooperative work with civil society groups.

The GCOMS 2018 campaign has started. This year, the IPB Global Day(s) of Action on Military Spending (GDAMS) includes the period from April 14 to May 3rd, 2018, under this slogan:

Reducing 10% of military assets will help save our planet. Take action! 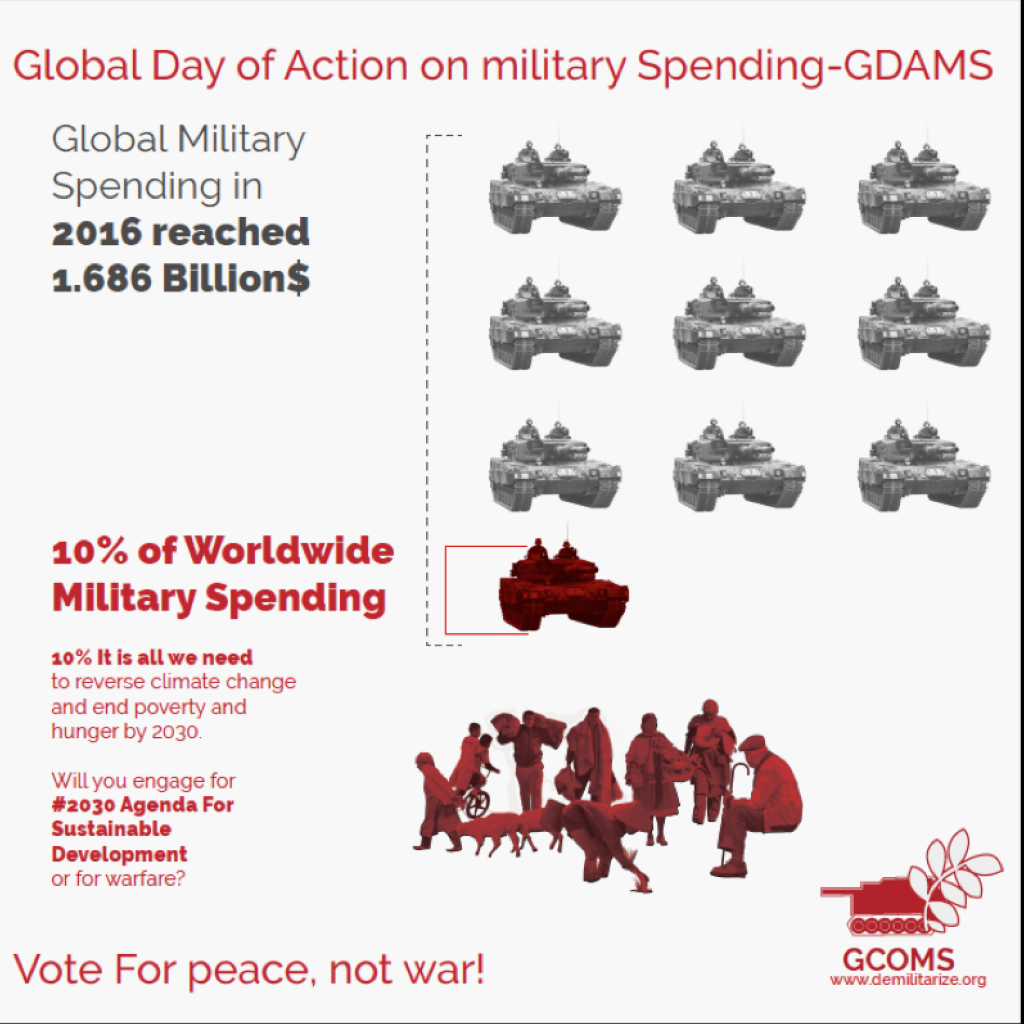 Thanks to Ernie & Charlotte Wiens for sharing their peace tax letter with us, below. May it inspire many others to act on the leadings of their conscience. 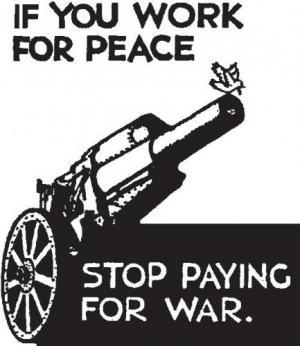 There are many Canadians who simply believe it is wrong to kill another human being for any reason. During World War ll some 10,000 Canadians chose to be conscientious objectors and refused to take up arms in order to kill. Some would say one should be willing to defend one’s country. This may sound noble but in reality if you go to war you aim to kill before you are killed.The problem, as you know, is that if everyone operates from this premise you end up with what we have today- militaries in almost every country on the planet, including our own, spending precious human,environmental and financial resources preparing to kill. Particularly abhorrent is the fact that even our own country produces military vehicles and equipment which are sold around the world to help other nations kill in the name of their country. It is not unlikely that these weapons could be used to wreak havoc on the country from which they originate.

No one said it better than former President Dwight D. Eisenhower:

“Every gun that is fired, every warship launched, every rocket fired signifies, in a final sense, a theft from those who hunger and are not fed, those who are cold and are not clothed. This world in arms is not spending money alone. It is spending the sweat of its laborers, the genius of its scientists, the hope of its children…This is not the way of life at all in any true sense…”

We long for a leader to speak and to act like this while in office. Mr. Trudeau, you yourself reportedly said that if you were not an MP you would consider participating in Non-Violent Peace Force. This is noble indeed. We write to request another option in keeping with your desire for peace. Maybe you are an MP and Prime Minister precisely for this option.

Use your conviction and influence and government to establish a Legal Peace Tax Fund so that Canadians like us can legally divert the military portion of our taxes to work for peace rather than preparing for war. If you would do so Canadians could choose this option and Canada would begin to show the rest of the world that we are serious about peace. Our children, our grandchildren and the children of the world will be in a better place.

Motivated by a vision for a peaceful Canada, motivated by our conscience and faith, and desiring a better world for all children we have diverted the military portion of our taxes to Conscience Canada’s Peace Tax Fund for the past ten years. We have annually informed your office, the CRA, our MP and other government leaders of our actions and our reasons for doing so. All to no avail. We continue to be pursued by the CRA for tax dollars we have already paid. Do you support this action in light of Canada’s Charter of Rights and Freedoms?

Our country has allowed for conscientious objection for over 200 years. Is this no longer an option at a time where technological warfare requires dollars more than bodies to fill boots and carry guns?

We anticipate a reply. Please consider our request seriously. And please, not just another form letter.

As we continue to pray for our leaders and the healing of all nations,

Ernie and Charlotte Wiens
R0G 0A1 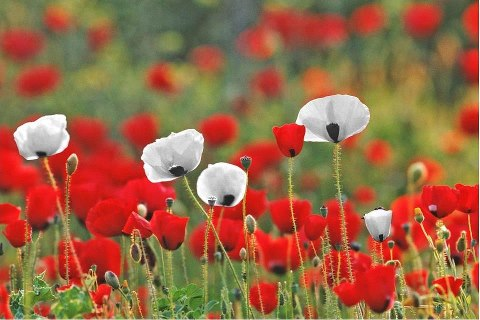 If you would like to remember more about war, the enormous costs, the deep-rooted causes, you might like to wear a white poppy (as well as a red one).

You can get white poppies via http://www.peacepoppies.ca (which has instructions on how to make your own) and http://echecalaguerre.org/agir/campagne-2017-coquelicot-blanc/ .

For more information, you might like to read this article: Personal and Public Remembrance: http://peacemagazine.org/archive/v29n4p27.htm  or consult our “Remembrance Day Education kit” under “resources” on this website or visit the Peace Pledge Union site: http://ppu.org.uk .

In consultation with other board members of Conscience Canada, we make the following recommendations. They are based on these premisses:

– that all lives are precious, and no human life or civilization is more valuable than any other
– that nonviolence is not merely an absence of violence, but a power which we can learn to cultivate and use to protect and embody the values we hold most dear
– that killing and participating in evil is an enormous sacrifice. Conversely, the sacrifices made in living in accordance with values of respect for life and nonviolence have value and meaning even in the face of short term setbacks and losses.

We grieve to see our country, Canada, so entwined in the military industrial complex. We devote between 6 and 10 per cent of our overall budget, the largest portion of the federal government’s discretionary program spending, to the military. And Canada’s commitment not to sell weapons to regimes or groups engaged in active warfare and human rights violations is a joke, especially with the approval of the sale of military vehicles to Saudi Arabia. According to Jane’s Defense Weekly, we are now the world’s second largest exporter of weapons to the MidEast!

We are grateful that this government kept its promise to withdraw from the bombing in Iraq and Syria. But we are convinced that many of our policies and decisions are actually undermining our security. Defence Minister Sajjan spoke of the need to increase dialogue with Russia, to reduce tensions in the region, but Canada’s involvement in NATO’s encroachment on the buffer area between NATO countries and Russia will doubtless raise tensions, rather than lessen them.

We need to shift away from a Defence posture based on trying to find and counter enemies to one that is based on Common Security (1) , on improving our capacity to work for peace and justice using the tools of nonviolence. This can best be accomplished by redirecting funding from weapons and the military towards a Department of Peace, which would include a Civilian Peace Service, capable of intervening nonviolently to protect people at home and abroad.

END_OF_DOCUMENT_TOKEN_TO_BE_REPLACED 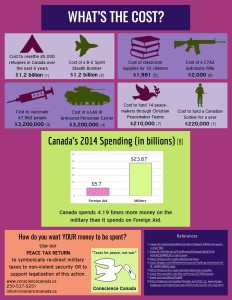